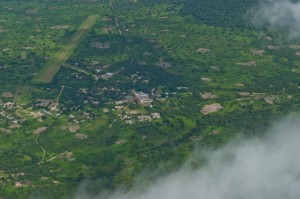 We moved to Kalene Mission Hospital Dec. 1989 and have lived here over 24 years. When we first came, Kalene Mission Hospital had over 200 beds and a Nurses Training School for 39 students. The nurse’s training school was later closed due to lack of staff. (This was reopened in January 2007). In 1989 my main involvement was on the practical side. I latter got involved with hospital administration doing the payroll, finance, inventory, billing, etc. on the computer.

Kalene did not have an airstrip although they had asked for help to put one in years before. I volunteered to do it and started the paper work to get the permission. This took about 1 1/2 years as the local Chief, Fisher family, District Council, Lands Department, Air force / Defense and Department of Civil Aviation all had to give approval. 120 men were hired to clear the bush. The airstrip is 1500 meters long, 100 wide, a taxiway 400 by 30 meters and a tie down hanger area 90 by 90 meters. A bulldozer was hired for 2-3 months to clear the anthills and level the land. Two graders and a roller then worked over a month to make the earth surface smooth. 300 people were hired to plant grass. Today it remains a grass strip.

Welcome to our blog!

A busy week of photography